According to a statement issued in Yola on Sunday by Mr Abubakar Muhammed, who is the Information officer of the ministry confirmed the incidence and gave the number of casualties currently inflicted with the disease.

He said 434 people are currently on hospital as a result of the outbreak and 13 were confirmed dead.
In his statement, the total numbers of reported cases of cholera from Mubi North and Mubi South Local Government Areas of the state as at May 26, 2018 stand at 434 with 13 people already dead. 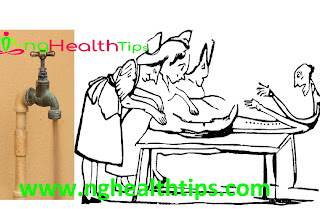 The Case Fatality Rate is said to be 3.0 per cent; Mubi North has 211 cases and 7 deaths equivalent to 3.3 per cent case fatality rate.
” Mubi South has a record of 223 cases with 6 deaths and a case fatality rate of 2.7 per cent.”
In his response, Dr Ezra Sakawa who is the Principal Medical Officer at Mubi General Hospital said that most patients that were infected with the disease had been treated and discharged.
Mubi had earlier been hit by cholera outbreak fortnight ago, this according to experts was a result of contaminated water.
It was gathered that 90 percent of the populace in Mubi gets their water from commercial water selle who source it from nearby borehole meant for irrigation purpose along the banks of River Yedzaram

Some women are battling with an increased social and psychological problems today as a result of obesity, here are simple ways to lose fat for women. Is there a time … END_OF_DOCUMENT_TOKEN_TO_BE_REPLACED

COVID-19 Situation Report As contained in the World Health Organization’s report, there is a global decrease in coronavirus cases and death incidences. With over 3 million new cases and over 73 000 … END_OF_DOCUMENT_TOKEN_TO_BE_REPLACED

The Concept of Environment It is no news that the environment is critical to humans’ health and their overall wellbeing. And to have another opinion that negates this position is … END_OF_DOCUMENT_TOKEN_TO_BE_REPLACED