Water has been known to play a very crucial and important role in humans’ life and it is also necessary for other forms of life.
Though water does neither gives organic nutrients nor calories but its importance can never be over emphasized. 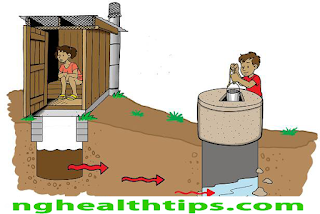 A good potable or drinking water is said to be colourless, odourless, and tasteless as anything outside these is not good enough for consumption.

However, there are certain diseases that are associated with water which is called water borne diseases.

This condition occurs as a result of drinking water that are dirty or already contaminated water. Parts of the ways by water becomes contaminated includes, direct or indirect access of faeces into the water, oil spillage especially in oil region etc.

These can leads to gastrointestinal tract (G.I.T) diseases such as diarrheal diseases, Cholera, Guinea worm disease, Typhoid, and Dysentery. G.I.T is simply a condition where by humans directly or indirectly ingest faeces into the body.

Diseases related to water has been recorded to have caused deaths of about 3.4 million per year and it is on its increase most especially in developing countries.

Causes of water borne illness and how it spreads

Unsafe water and poor sanitation: – Waterborne illness or disease occurs as a result of drinking contaminated water by a variety of disease causing organisms (pathogens), biotoxins, and toxic contaminants which are not visible by the used of the naked eyes.

Waterborne disease causing microbes can also be contracted by eating/swallowing food or beverages that enter into their mouth.

Thus, they are transmitted to get infected like dirty hands, cooking vessels,   dirty.clothes, mugs, uncovered foods and drinking water.

Contact with animals (e.g flies)or their environment (e.g defecating in the open), or from one person to another.

Climate change-induced: – flooding for example can disperse faecal contaminants, increasing risks of outbreaks of waterborne diseases such as cholera.

A rise in sea temperature can result in spread of diseases caused by Vibrio bacteria such as cholera and other intestinal diseases.

Water contamination endangers people especially those who have low immunity power as well as travelers.

Types and Symptoms of Waterborne Diseases

Giardiasis: caused by protozoa. Symptoms include diarrhea and abdominal discomfort.

Hepatitis: caused by a virus. Symptoms include fever, yellowness of the eye, dark coloured urine, cold and abdominal distress.

Shigellosis: caused by bacteria. Symptoms include blood in faeces, diarrhea and fever.

Other symptoms can include skin, ear, respiratory, or eye problems, low fever, abdominal pain and frequent bowls or stools.

The health effects of drinking contaminated water can range from no physical impact to severe illness or even death.

Health impact of drinking contaminated water can sometimes be noticeable and discovered instantly, or for many years may be asymptomatic.

Freshwater resources all over the world are threatened not only by over exploitation and poor management but also by ecological degradation source of freshwater can be contaminated, this could be as a result of discharge of untreated waste, dumping of industrial effluent (chemical e.g lead, mercury etc)and erosion from agricultural fields.

Industrial growth, urbanization and the increasing use of synthetic organic substances have serious and adverse impacts on freshwater bodies.

Most developed countries suffer and face difficult challenges such as problems of chemical discharge into the water sources mainly ground water and also agricultural run-off in water sources.

They are:  Maintain a high level of sanitation and hygienic practices for household water.

These measures may include

3. Check the label of bottled water or drinks for expiry date and sealed before consumption and be sure your bottled water is kept in a dry place out of direct sunlight.

4. Avoid exposure of water supply to harsh chemicals or pesticides.

5. Make sure nails are cut short.

6. Wash your hands properly with soap and warm water before and after eating, use of the toilet etc.

7. For rural dwellers, boil drinking water; consume only freshly cooked or warm foods not half cooked, pre cooked or refrigerated.

8. For travelers, avoid eating foods, fruits, beverages from roadside vendors as they may be exposed to flies.

9. Do not bite nails with the teeth as an aid to cutting it.

10. Use of proper toilets for defecation.

11. Ensure to take proper care in disposing of infant and toddler feces.

Water borne diseases  can be controlled through:

5. Avoid self medication, over the counter drugs. Get proper advice from a qualified medical doctor.

Some women are battling with an increased social and psychological problems today as a result of obesity, here are simple ways to lose fat for women. Is there a time … END_OF_DOCUMENT_TOKEN_TO_BE_REPLACED

COVID-19 Situation Report As contained in the World Health Organization’s report, there is a global decrease in coronavirus cases and death incidences. With over 3 million new cases and over 73 000 … END_OF_DOCUMENT_TOKEN_TO_BE_REPLACED

The Concept of Environment It is no news that the environment is critical to humans’ health and their overall wellbeing. And to have another opinion that negates this position is … END_OF_DOCUMENT_TOKEN_TO_BE_REPLACED