Chickenpox is a usual infectious disease that is capable of been transmissitted  from from person to another. 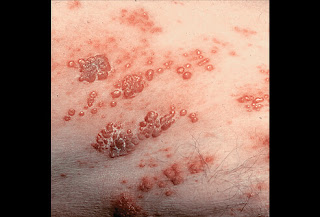 More than ninety percent of people are been infected with this viral illness except those who have been vaccinated against the disease during their childhood stage.
The disease is capable of staying in the host’s  body after the first attack.

The disease becomes active back in the host nerve cells after staying for some times in the body. It causes shingles in the body when it occurs that way.


After an infection, some of the virus may stay in the body (in nerve cells) and at some later time the virus can become active again causing shingles.

The shringles are body rashes that is very painful.

Chickenpox manifest in most of victims who mostly children with a gentle or a non harsh I’ll health. Whereas,some have the tendency of becoming sick straight.

Most times, when adults get infected by chicken pox, it is very severe as it can lead to death.

The infection of chickenpox normally lasts for about seven to ten days in the body before the symptoms starts appearing. The infections may begin with a feeling of unwell and fever such as experiencing coldness.

Some children have the first sign of this contagious disease with body rashes. This rashes normally begins at the chest rest, that is, majortiy of the rashes spots appear at the chest and head; including in the hair.

Other variations is that some victims of this viral infection both adults and children experience the spots in all their body (this exclude sole of the feet and palms of the hands).

The infection spots  commences with a red, itchy lumps, which later turn out to  become blisters (this is a little pocket of human bodily fluid  such as serum, plasma, lymph, pus or blood that is stored at the  epidermis of the skin.

This blister typically occur as a result of forceful rubbing or friction,freezing, chemical exposure, burning or infection. Most blisters are filled with a clear fluid, either serum or plasma).

The topmost area of the blisters formed fall off allowing the watery fluids in the already formed blisters to escape.

Then a harden layer called crust is formed on the spot which falls off after about 5days of its existence there.

The rash spots usually  come in waves for several days so that there will be formation of  new blisters,crust sores and lumps on the affected person’s skin at the same time.

How is chickenpox spread?

Chickenpox infection is transmitted from a person to another when the carrier of the infection coughs,sneezes or through touching of the  fluids of the blisters  formed on an already infected person.

It can as well be spread through touching of items (such as dressing) that has been infected by the fluid from the blisters.

On a rare occasion, chickenpox can transmissitted to another person from the watery fluids in the blisters of an infected person with shringles.

Chickenpox victims become infectious from the start of the illness health and remains like that close to 2days before the appearance of spots.

Chickenpox case is so tense to the extent that if there are still new blisters or new crusts on spots, the person remain infectious to others and if new blisters are not formed,the person will not be contagious.

How long does it take to develop?

It normally takes up to fourteen  to fifteen days for chickenpox to be formed after coming in  contact with an infected person. And the range is between ten to twenty one days.

Children who have contacted the infection should be kept away from school for 5 days (isolation) after the first appearance of the disease until the blisters become dried up.

The scars might still be there but so far the blister had dried up such infected child can be allowed to go back to school .

Chickenpox experience in most children commences with a gentle illness , however it is possible for some to have spots over the entire body, the mouth and in the genital area inclusive.

There might be brain infection(encephalitis ) as well. The affected child may atimes become quite unwell from this infection, but will fully recover.

The spots left on the skin  are always very  itchy, and when it is scratched can result to bacterial infection such as school sores or impetigo.

There is always scar on thr spot and the scar are itchy. Children find it difficult not to scratch the spot on their body.

Adults frequently experience   more harsh illness, and  few of the infected adults get suffer another health condition e.g pneumonia while  some die from the disease (this is an uncommon case, about three people in hundred thousands  healthy people who suffer  this infection lose their life).

Chickenpox infection  can be a deadly sickness for people who have immune problems  for example, people who are on treatment for severe asthma, people living with HIV/AIDS, those who are been treated for cancer.

All these people need to  see physician promptly whenever they come in contact with anyone suffering from chickenpox.

There is a treatment that can serve as protection for them and reduce the severity of the effects of the illness  if they get the treatment early after coming in contact wth an infected person.

Chickenpox in pregnancy and newborn babies


If a pregnant woman becomes  infected with chickenpox during the first half of a the pregnancy, such baby has a minimal  risk of been infected with the disease,it is less than 2percent.

Birth defects and scarring are other effects that such pregnancy is prone too.

However, if a pregnant  woman gets chickenpox infection from 5days before delivery  to 2days after delivery, the risk is estimated as thirty percent for such baby to develop a harsh infection.

There is all tendency  that many baby die from the illness.

You are advice to see your doctor if you are carrying pregnancy and come in contact with chickenpox infected person.

If you as a pregnant woman had contact with chickenpox patients, and you are confirmed not to have been infected with it, Zoster immunoglobulin can be taken provided there is need for it,this will serve as a temporary guard against the disease

This can equally be administered on other people who have high risk of the disease.

We have no specific treatment available on how bad the chickenpox is or how long it lasts.

Unlike people who have other severe health problems affecting their immune system may be able to get some antiviral medications.

Parents should learn to give their children plenty of drinks and give paracetamol or ibuprofen if needed, for fever and pain.

If mouth blisters occur, don’t give food or drinks that have a lot of acid or salt. (Orange juice and mostly other citric juices are acidic, try pear juice instead, Ice cream and jelly are okay.


Getting of soothing mouth washes from a chemist can help. Soothing lotions, such as calamine lotion, or special oils that reduce itch, such as chamomile, eucalyptus and lavender can be used.

Your chemist is the best person to recommend the best one to use with their usage directives. There are oils that are added to cool baths.

Sodium bicarbonate, oatmeal or vinegar in the bath can also help soothe the itching. Anti histamine medicines can help with the itch.

Aspirin shouldn’t be given to children with chickenpox, if not, there will be an increased risk of a serious illness known as Reye’s Syndrome especially for a child under 16 years with chickenpox  or some other viral infection such as influenza.

This syndrome is an uncommon illness but  causing severe damage to the brain and liver, however, often fatal even when the child is given intensive care.

It is recommended in mostly all countries that children be immunised against chickenpox when they are 18 months old and subsequently when at age eight in school.

Same way we can’t afford to unadminister the vaccine for people in ‘high risk’ jobs such as health care, child care and teaching.

However, these set of people might have to pay for their vaccination. The vaccine should not be given during pregnancy.

Besides, no problems have been recorded yet when pregnant women was accidentally given this vaccine.

Perhaps, numbers of people may still continue to having chickenpox after immunization (only about 7th from 10th to 9th from 10th of people get fully protected), but the illness will be severe than if no immunization had been given.

It is so uncommon for healthy people to suffer any side effects from chickenpox immunization.

However, children and adults of about 20% are likely going to experience a little side effects of soreness at the point of injection, 5% or less will be fever prone and less than 5% will get a rash.

In severe conditions, drugs such as acyclovir has been known to work  perfectly for the treatment of chicken pox .

Most especially  people  with whose immune system has been damaged. Medications such as acyclovir must be over-emphasized because it’s effectiveness to treating chickenpox in people with damaged immune e.g  HIV/AIDS and cancer patients is incomparably perfect.

Vaccines for chicken  pox can be administered  when one contact it, however, this must be done on time, immediately after the contact (latest in 3 days).


Be reminded that health is wealth, therefore do not joke with it but rather take prompt actions.

0 thoughts on “The untold story of Chickenpox”

Some women are battling with an increased social and psychological problems today as a result of obesity, here are simple ways to lose fat for women. Is there a time … END_OF_DOCUMENT_TOKEN_TO_BE_REPLACED

COVID-19 Situation Report As contained in the World Health Organization’s report, there is a global decrease in coronavirus cases and death incidences. With over 3 million new cases and over 73 000 … END_OF_DOCUMENT_TOKEN_TO_BE_REPLACED

The Concept of Environment It is no news that the environment is critical to humans’ health and their overall wellbeing. And to have another opinion that negates this position is … END_OF_DOCUMENT_TOKEN_TO_BE_REPLACED